For the first time since 2019, the hands of kids were busy at work inside the Broomfield Library’s inventHQ for a summer miniseries.

A group of 11 students spent the week learning about wearable technology, and on Friday they each presented their projects showcasing their programmed simple circuit and how it works.

“We’re having students use these custom-built prototyping tools that 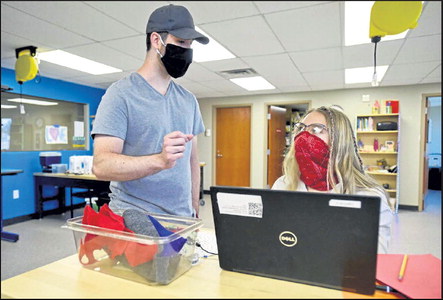 michael Schneider, left, helps Jade Wingett with coding during a camp taught by researchers from the university of Colorado Boulder at inventHQ in Broomfield on Wednesday. 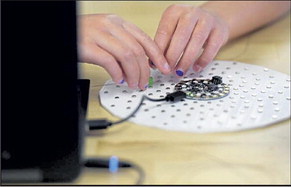 Clara Valter works on her design during a camp taught by researchers from the university of Colorado Boulder at inventHQ in Broomfield on Wednesday.

either (fellow co-leader) Michael (Schneider) or I designed to help the students prototype circuitry,” Hill said Wednesday. “Right now, we’re working on design, working on code and circuitry and making sure everything works well. (Then they will) sew it on a banner or flag or canvas bag.”

Aden Mackinney, 10, chose to make a flag with the symbol of his favorite YouTuber, EthanGamer. Natalie Cartagena, 13, was working to program a stuffed dog that could be put on mute.

“Every time you want the dog to be on mute you press the button,” she explained. “And then when you’re done, you unpress it.”

Cartagena said she hasn’t practiced coding since the third grade, and the weeklong miniseries gave her something to look forward to.

More than anything, Schneider, a CU Boulder graduate student and miniseries co-leader, said the camp was designed to be fun.

“The goal isn’t for them to be programmers out of this camp. It’s just to craft things that are fun,” he said. “Interest drives invention. I think the real quote is necessity drives innovation. … First, you have to want to build something and from there you have learning opportunities. Have something fun to build and you’ll learn other things.”

Schneider and Hill’s grant-funded research is focused on debugging.

“A lot of research I’m into is how do we help with debugging and understanding,” Schneider said. “Because they’re still learning about programming and how these things go, but they haven’t taken a physics class. They haven’t learned about electricity. They don’t know about resistance. It’s kind of hard to figure out how to create and craft with limited knowledge of the underlying stuff. But luckily with today’s technology they can craft a lot without having to take a physics class in high school.”

The students learned using a microcontroller called the Circuit Playground, which is specifically designed for novice learners.

Though some of the kids were first-time coders and some were more experienced, they were all able to learn from the Circuit Playground.

“This program in particular really combines a lot of creativity with math and science they’re getting in school. We know, as the makerspace for the county, there’s a wide range of science and computer education out there because we have four school districts,” Cianflone said. “Some are getting a lot of this at school and some are not getting a lot. The makerspace tries to counterbalance that by providing things they may or may not get at school. … It’s an equalizer.”

The miniseries was free and each student was sent home with the Circuit Playground, their final project, a lithium ion battery and a USB cable in case they wanted to reprogram their project.

Cianflone is one of two staff members dedicated to inventHQ. She said the makerspace couldn’t hold any in-person events last summer, and it’s exciting to be back. Last September, inventHQ reopened, and it was one of the only makerspaces that opened in 2020, she said. In the space’s open hours, she said she sees people from other counties coming in and utilizing the amenities.

This week’s program is the only weeklong miniseries planned. There are several CU Boulder-affiliated series in the future, Cianflone said, like cyber security and stop motion animation programs.

Click here to see this page in the eEdition: